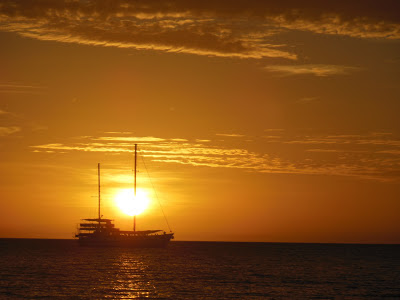 After a few months of planning I was finally ready to take Luke and Aidan on a boy’s Outback adventure. 10 nights, 9 camping rough in a 2 man mountain tent. 1400 kilometers (850 miles) into the bush. All heat, sweat, stink, dusty roads, snakes and crocs. Also Barramundi fishing, gorge hiking and mountain stream swimming. Throw in a nightly campfire and some ancient aboriginal rock art and it seemed like a great time. And believe me it was! The girls, on hearing the proposed itinerary, deferred. They want their own adventure, one without the snakes and crocs….hopefully, coming soon… 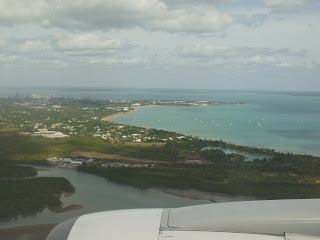 Darwin is the capital of the Northern Territory, and has a pop. of less than 100K. Over 50 nationalities make up the population of this small, mellow city; the Australian gateway to Asia. It sits on the tropical Timor Sea, next stop Indonesia… Incredibly, it’s the only population center of any size between Cairns on the far NE coast of Queensland and Perth on the far SW coast of Western Australia, a distance of over 3,000 miles. And it feels at the very ends of the earth too… 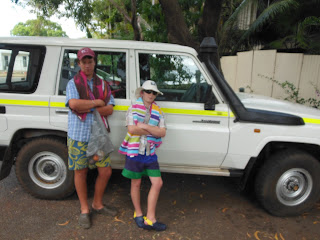 A classic Darwin experience is to have dinner among the Asian food stalls at the Mindil Beach markets west of downtown. Only open during the “Dry” between May and October, it’s a free, tropical, open air street fair on Thurs. nights and Sunday afternoons. The fresh Asian food,  tropical fruits, art and crafts are wonderful to enjoy until the sun begins to set. Then everyone walks through the dunes to watch the sun sink into the Timor Sea from the beach. As evening falls and the stars come out, the lights go on and the market pace picks up. We flew in specifically on a Thursday to make sure we got there, a good call…It’s a wonderful, adventurous welcome to the Top End, as the Aussies call this monsoonal upper 1/3 of the Territory. 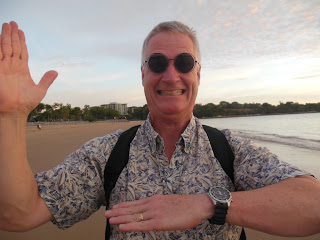 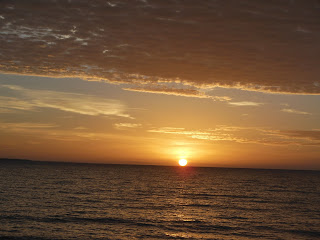 The next day it was up early, load up on provisions for days in the bush, a bit of site-seeing around Darwin, then off into the wilds. Darwin has a very varied and interesting history. Briefly, it was the only Australian city to be attacked by the Japanese in WW2, and was bombed 64 times with pretty extensive destruction. There are old fortifications all around the strategic points outside the city.  That, however, was only a prelude to the much greater destruction wrought by Mom Nature on Christmas Eve 1974, when Cyclone Tracy scored a direct hit and levelled 80% of the buildings in the area. Many of the old classic examples of tropical architecture were wiped off the map forever, and today’s downtown feels a bit more average and non-descript than one might expect. Natural calamities aside, Darwin retains a very mellow, Margaritaville vibe, like some giant Key West, that is beguiling. 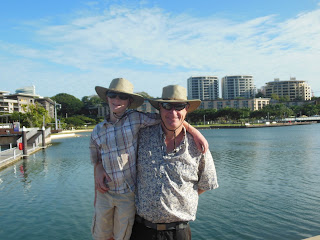 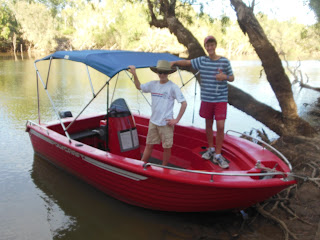 Drive 40 km east of Darwin and you are really getting into the bush. Things drop off fast… and Kakadu is still 200 km away. First stop, Mary River National Park, where we have a tent space and a skiff rental awaiting. Aidan’s #1 Bucket List for life is to catch a wild Aussie Barramundi; a hard-fighting, aggressive estuarine species highly esteemed by Aussie fisherman. Like Texas bass, for some it’s a religion. I think Aidan just got born-again!

As we were intently watching crocs, working our way up this tributary, with dusk falling, I happened to run the outboard motor up onto a rock ledge and stall out, with crocs drifting around the boat, ISYN! After a few frantic minutes, we managed to free the boat and hadn’t snapped the screw or the drive shaft. Thank God to be underway and heading downriver…..It might’ve been a long, hot night; swatting mozzies while waiting to be rescued……(100% true story…and it’s only night one in the bush…whew…!) 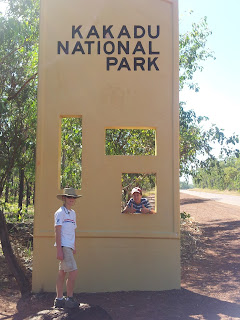 Next stop Kakadu NP, which is a crown-jewel of the Aussie park system, right up there with Uluru or the Great Barrier Reef for those in the know. It’s very hard to describe briefly, but a few major highlights: it’s one of only four World Heritage sites double-listed in AU for both natural and cultural features. It’s vast, over 7,000 square miles! It’s the largest bird-breeding area in the entire southern hemisphere. With almost 300 bird species, it contains 1/3 of all known Aussie species, and over 10,000 insect species. It has seven or eight major unique eco-systems intact within it’s borders; hundreds of miles of pristine mangrove coastline, seasonal  tropical wetlands, open eucalypt savanna, several entire undisturbed tropical river systems intact from headwaters to coastal estuaries. The park is bisected by a 500 km long, 1000 ft limestone escarpment over which fall some of the most impressive waterfalls on the planet. Oh, and to top it off, it’s the site of the oldest continuous living culture documented on earth. The local Aboriginals, 15 major distinct groups, have been living here for approximately 50- 100,000 years. The limestone escarpments are riddled with an estimated 15-20,000 rock art and sacred sites, less than half of which have been documented. So, all in all, a pretty amazing place to spend some quality adventure time.

Ubirr is a major art rock site that’s set up and well-managed for the
tourist hordes, an antipodean Sistine Chapel of sorts. It’s set in a stunning shallow valley, surrounded and protected by low limestone cliffs. It’s considered a broken- off outlier from the main escarpment ridge, some 20 miles to the south. This gives it the advantage of sitting at the edge of a vast, flat alluvial flood plain that stretches to the horizon. Another classic Aussie experience, bordering on pilgrimage, is to climb atop Ubirr and contemplate life and time as the sun sets over the floodplain, as it has done daily for eternity. You really do get a sense of the infinite, sitting in a place like this, even though you are unlikely to be totally alone. 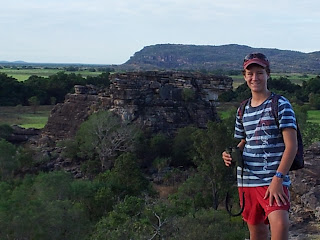 The overall landscape feels alien, exotic. With the heat in this, the cool season, rising to 90+ degrees during the day, it’s reminiscent of the Rift Valley of Africa or somewhere, though I’ve never been. If a herd of elephants came running out of the bush below, it would seem perfectly in keeping with the landscape, oddly enough…But no, only a few foraging kangaroos, a Wedge-tailed Eagle silently soaring the updrafts…a mob of coarsely squawking Sulfur-crested Cockatoos…breaking the enveloping stillness of dusk….
Well, that was so good, the next day we climbed back up Ubirr to see things in a somewhat different light. No one around; still, beautiful and timeless. Popular, yet still profound..

So, that’s a lot of adventure already. I think this trip will require multiple installments to do it justice and not over-tax my readership. Stay tuned for part 2 which will include the Yellow River Billabong sunrise wetland tour and lots of waterfalls. Until then, staying safe and dry in the Outback, Cheers! ddu, Luke and Aidan