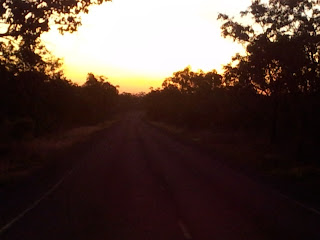 In part two, we are up early and heading for the Yellow Water Billabong sunrise wetland tour. It’s popular, and an excellent way to get out on the wetlands that are so much a part of Kakadu. The tour is part of a hotel and restaurant complex that’s owned and operated by the local “traditional owners” or Aboriginal groups of Kakadu. In fact, they own the park and lease it back to the government. It provides much needed income and jobs, keeping the younger generations providing stewardship and working out on the traditional lands, So, win-win all around. The guides are well versed in all the local lore, flora and fauna, so you even learn something while on vacation. Triple win! 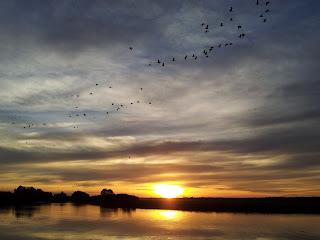 As the sun begins to rise, the bird life becomes fantastically active. For a brief 30 minutes the air vibrates with the sound of thousands of Whistling Ducks coming in waves to roost for the day. On a two hour tour we probably saw 40 bird species, wetland, waterfowl and some tropical woodland species. Kingfishers everywhere…My cheap little cell phone camera could not hope to catch the intricate beauty of this environment. I think I need to upgrade soon…. 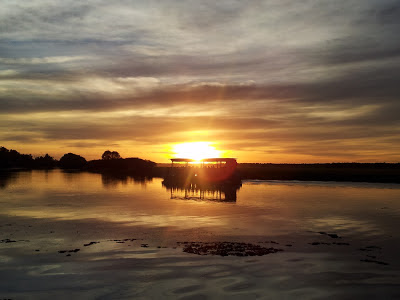 A bonus to the sunrise tour is that it comes with a full-on Aussie breakfast; bacon, eggs and fresh fruit..oh, and coffee….coffee…..:-O…. Highly recommended if you ever find yourself in Kakadu NP. 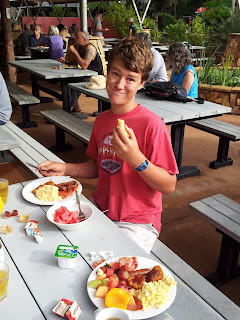 Now it was time to hit the 4WD tracks and get out into the backcountry. Jim Jim Falls, 20 km up a corrugated, red dirt road, then 10 km more down a rutted goat path…Atrocious roads for such a major site… In fairness, it had only been open a few weeks due to high water and croc surveys. Twin Falls down the same road was still closed.

After a wild and wooly last 10 km 4WD ride into the falls, you hike the last 1 km with the roaring sound of the falls increasing as you approach, it’s pretty fantastic as it unfolds.

The Top End has a distinct tropical monsoonal climate, hot and dry winters (May – September) and hotter and extremely wet in the summer (October- April). In fact the local Aboriginals recognize six distinct seasons, with the build up and wind down of the Wet.. Most of the park is closed in the full-on Wet, as roads can be under 6-8 ft of water for months sometimes.  It’s now early in the Dry and the massive torrent that flows over these escarpments has slowed to a safe level. The rangers have been busy putting in temporary bridges and boardwalks that are again lifted out before the Wet begins. 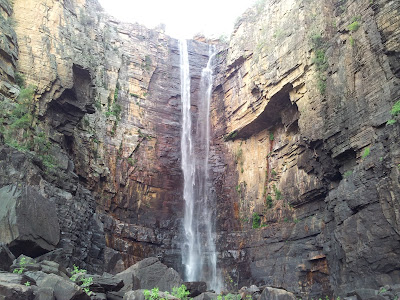 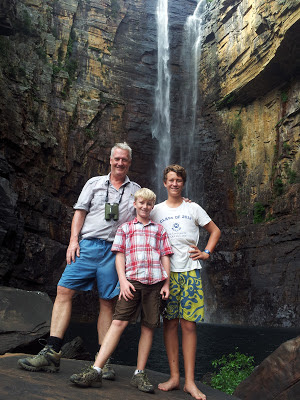 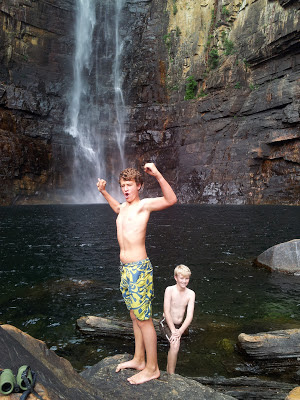 It’s hard to fathom how large and impressive this waterfall is from pictures. The canyon walls are sheer and 400-600 ft high, crowding in overhead. The base plunge pool is around 150 yards across, the depths coal black and slightly eerie….With a cool breeze blowing off the falls and down the canyon, the 90 degree heat dissolves and you are standing in a shady, glistening cathedral of sorts that is among the most impressive I’ve ever seen…The water is crystal clear, cold and full of schools of fish. Having packed in a mask and snorkel, we were able to explore an intricate word of underwater boulders, timber snags and sandy ridges that felt almost Caribbean. 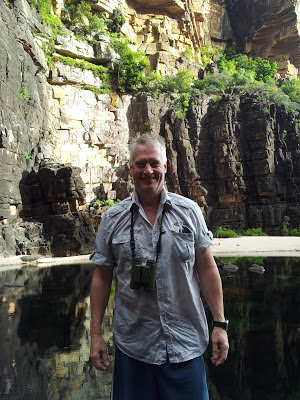 Coming back down canyon you see plenty of warnings to be croc aware. During the Wet, these canyons are inundated with brackish water coming upstream in flood. Estuarine crocs (Salties) come up river feeding. As the waters recede, many are trapped high in the canyons, and they get mighty hungry. The rangers have a very precise method of clearing the pools for swimming, but there’s no guarantee…They must do five seperate night floats, shining high-powered lights looking for eye shine. They also set baited croc traps for several weeks. Finally, once things seem safe, they leave behind small bouys which the crocs will attack to drive interlopers out of their territory- leaving telltale toothmarks on the bouy. It all makes for some very spooky pool plunging for sure, but I guess that’s part of the thrill! 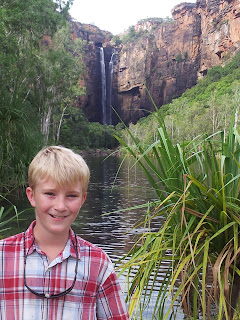 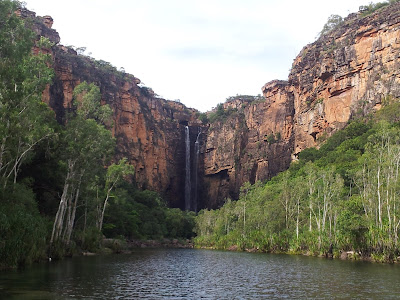 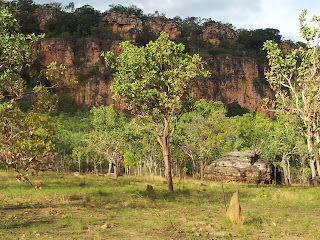 Soon it was back on the backroads, heading through the escarpment country…First stop Maguk Falls, a long aquamarine pool headed by a gently sloping cascade. Crystal clear, cold and full of fish….The approach trail, 1 km through a lush, riperian tropical rainforest pocket in the 90 degree heat only added to the anticipation. 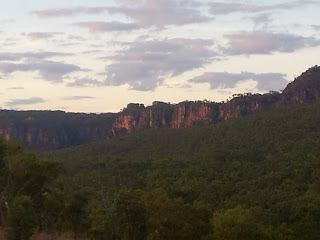 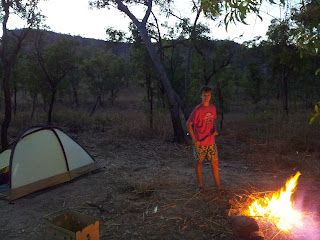 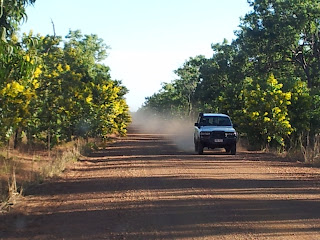 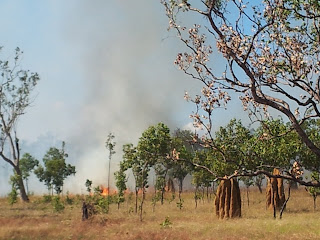 The open eucalypt savanna that dominates the uplands along the escarpment ridge is an ecosystem that depends on annual fires. The Aborigines have burnt seasonally for millenia, calling it a clean-up…The understory stays open and the grasses thrive. Through the walls of dense smoke Whistling and Black kites, large raptors, are seen diving in groups at the newly exposed meals of snake and lizard… 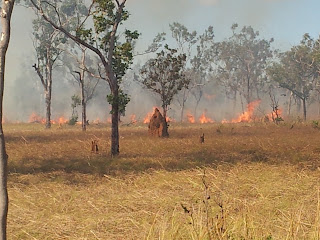 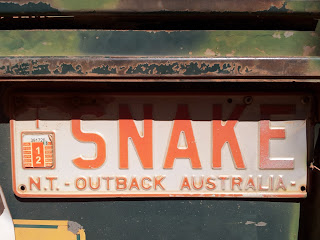 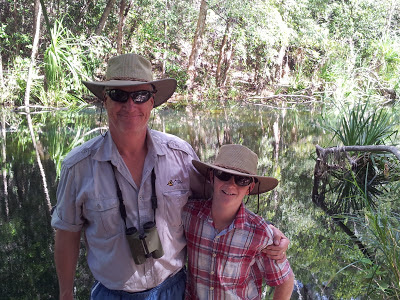 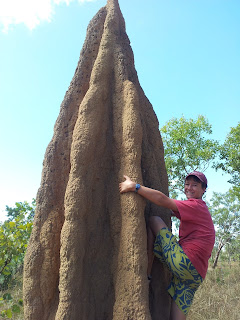 After a cool dip we encountered a field of Catherdral Termites and their fascinating mounds. They harvest and store grasses inside. These tiny insects, less than a quarter of an inch long, but numbering in the millions, create colonies that last for up to a century. The shell is a hard, rough sandy consistency, strong enough for Luke to climb! 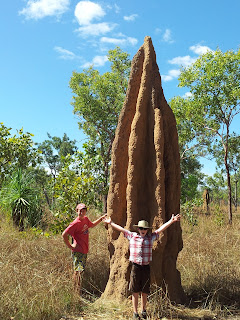 Our camp for the next night was the remote Koolpin Gorge, or Jarrangbarnmi, sacred to the local tribes and lying deep within the “Sickness Country” of SW Kakadu. Here the land rises and trees thin out due to poor soils and less rainfall. There are many ancient legends about dangerous spirits living underground and how you must be respectful not to disturb or anger them. Access is strictly limited by advance permit and the final 10 km is by rough, steep 4WD track, after a 40 km dirt road approach. The campground is primitive, 30 miles from the nearest paved road. Fantastic stars…!

The most amazing thing turns out to be that this is the site of one of the richest Uranium deposits on the planet. The earth here also holds major deposits of Mercury, Lead, and Arsenic. When scientists mapped the deposits, the boundries were almost exactly the defined “Sickness Country” of the local Aborigines! It seems there was a strong basis for their ancient legends after all. 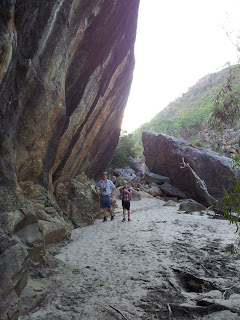 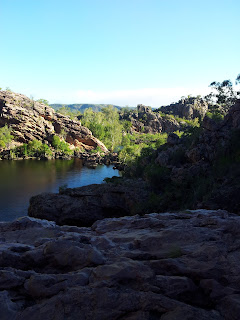 Heading up the gorge into the rough stone country was a bit eerie, truth be told. There were Croc warnings in the lower pools, late afternoon shadows lengthening; on high snake alert, we were alone a long way from anywhere. The rocks, jagged and tumbled. Few birds or signs of life…We all shared a subliminal sense of caution, as if anything could go wrong at any time 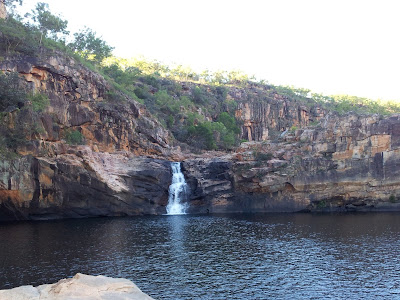 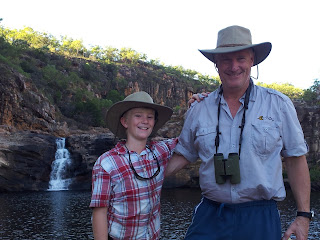 We finally got to an upper pool, supposedly Croc-free. It was deep and dark, steep-walled and a bit unsettling. Pale white toes hung suspended; helpless over the bottomless, cold void. It was too easy to imagine a rouge Croc lunging up from the depths and dragging you under… We did a quick plunge to cool off,  but were relieved to be dried off and heading back down the gorge. The overall effect was the antithesis of the fertile, relaxed and welcoming Maguk Falls of the previous day.