Stephanie and I finally found the right nanny, and got away for an eight day trip alone to Tasmania. There was a four day Emergency Medicine conference in Hobart, the tidy capital; then a three night road trip up the east coast. It was our first trip away alone in 10 years! It was a wonderful break…

Tasmania, though remote, has a long history by Australian standards. Hobart, the second oldest Aussie city, was founded in 1803 as the second colony. The initial settlement was only 262 people, 178 of whom were convicts. The colony grew rapidly, and became infamous for the most feared penal colonies in the British Empire between the 1820-1850’s

Tasmania is sort of considered the Vermont of Australia, which is sort of considered the Switzerland of the US, if you follow me…. It’s very bucolic and agricultural in the north and east, becoming wilder, more remore and mountainous in the west and south. It has a very developed, high quality artisinal food culture; famous for lamb, fruit, fine wines, cheeses and dairy and especially fresh seafood…Foodie heaven…It’s nickname is the “Apple Isle”… 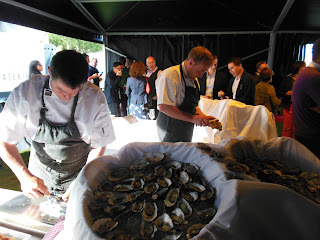 Tasmania has one of the largest collections of stone heritage buildings in Australia, many convict designed and built

Hobart is a compact, walkable city of 150k with great architectural diversity. It’s on the southern coast, an area so far south that to me it feels like the far north; temperate, with cold winter winds blowing in from Antarctica instead of the Arctic. The place has a remote, sub-polar vibe; much like towns I’ve known in Alaska, or perhaps Scandinavia…tho I’ve never been…We were there in late November, late spring, so the evening light was long and lusterous; and flowers were at peak of bloom. 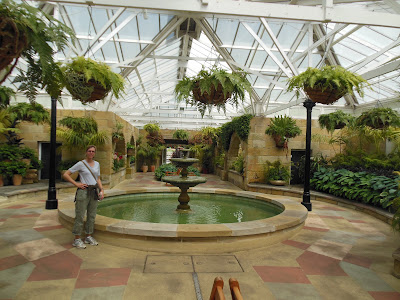 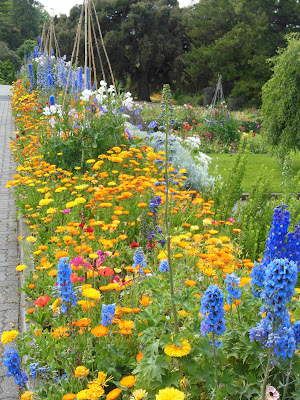 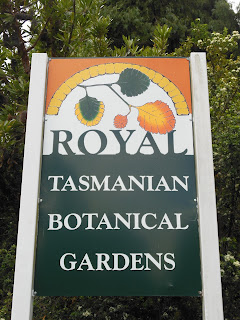 Hobart has one of the oldest Botanic Gardens in Australia, like Sydney, it started as the colony’s farm and is said to have the largest specimen collection of conifers in the southern hemisphere.. 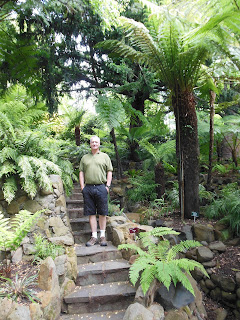 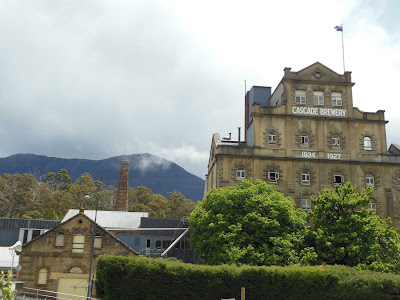 One day, it was off for a ride to the top of Mt.Wellington for panoramic views of the southern coast. But first, a quick stop at the Cascade Brewery, Australias’s oldest…

Another Tassie oddity is the Thylacine, a now-extinct (?) striped,wild dog that, bizarrely, is also a marsupial; carrying it’s live young in a pouch. Called a Tasman Tiger, the last known one died in a Tassie zoo in 1937; but there are regular unconfirmed sightings in the wild, mountainous wilderness of SW Tasmania…Could they still be out there lurking….?? 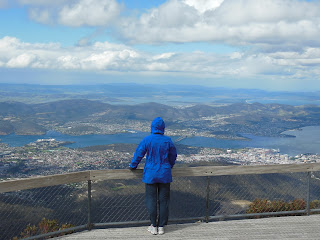 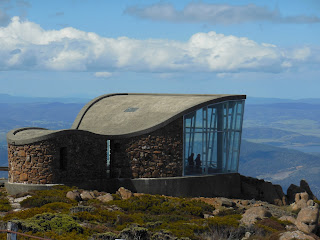 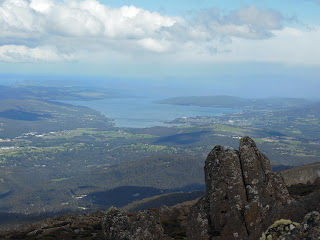 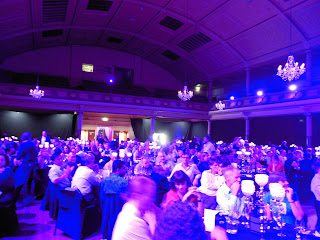 Next night was a five course degustation meal with matching wines at the old Hobart Town Hall…Very swish affair , all highlighting the best of Tassie produce ,wines and live music…..These guys party like rock stars down here..Sublime, but we gotta get out of town and preseve my liver…!

So, conference survived, we hit the road up the east coast. We avoided the western mountains because Tassie friends in Brisbane warned us that the weather could be really touch and go up there at this time of year. It was windy and freezing up on Mt. Wellington., so we opted for the mellow route, travelling through a bucolic landscape that reminded one of the English countryside to the village of Ross, site of the famous stone convict-built bridge. It’s the oldest stone bridge in Australia, c 1823, overlooked by the oldest Catholic church, c 1836.. 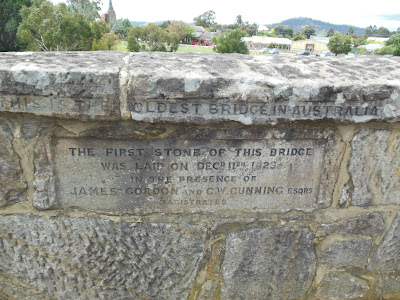 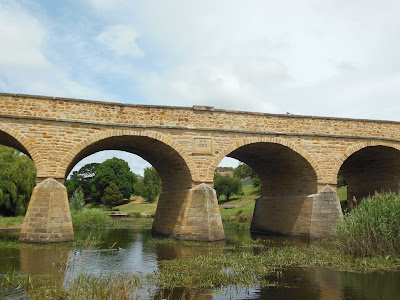 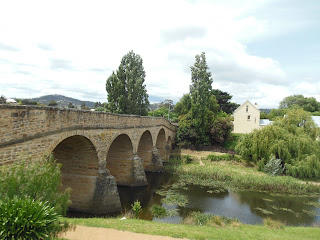 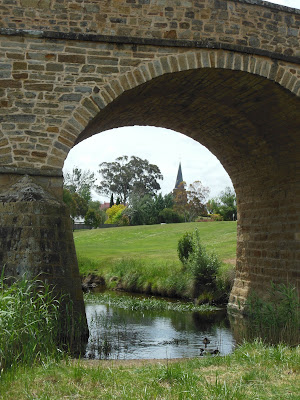 As we headed east and north, the land flattened out and became sheep covered..In the distance rose the curious granite Hazards of the Freycinet Peninsula, our destination for a few days of hiking 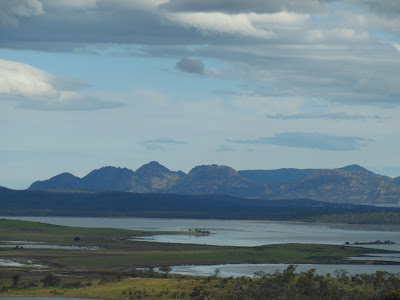 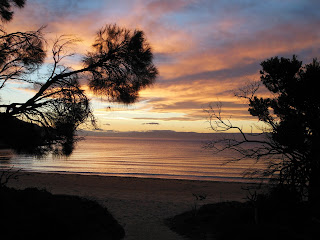 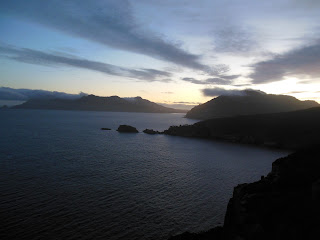 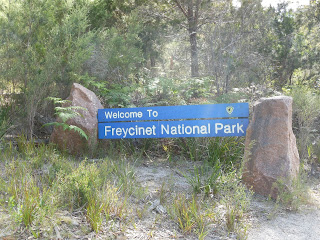 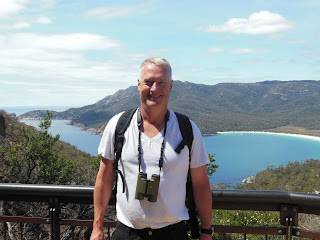 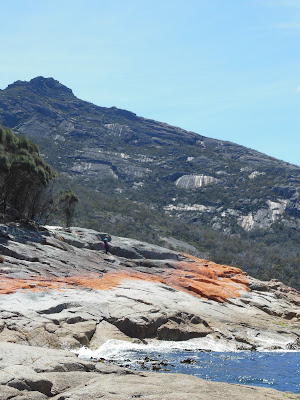 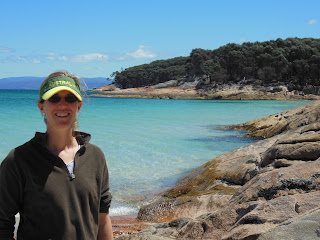 We hiked over the pass and for 12 km along a remote headland..The bay waters were crystal clear and colored like the Carribean 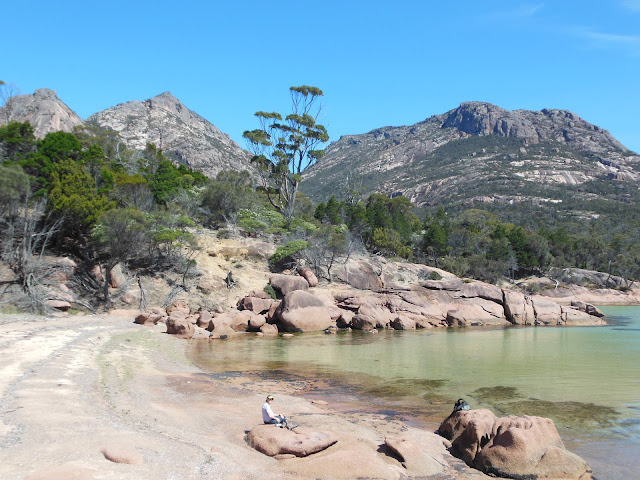 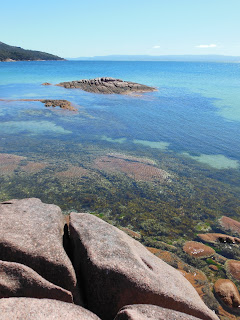 After our exertions it was time for some cool local Reisling and fresh Freycinet scallops…I am a happy man at this moment…In fact, I think I feel a little budda sitting over my right shoulder…. 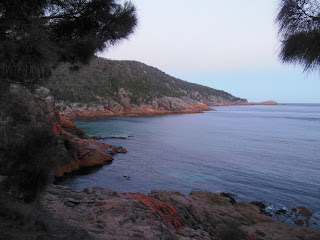 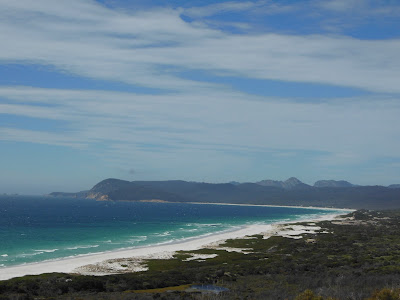 Sad to have to leave Coles Bay on the Freycinet, an uncommonly beautiful blend of agrarian Ireland and granite encrusted Acadia N.P. in coastal Maine..Not stupendous or grand, but something even more intriguing; pastoral, intimate, harmonious, with glorious food and sunshine beside the ever restless ocean…A very remarkable place on the planet…. 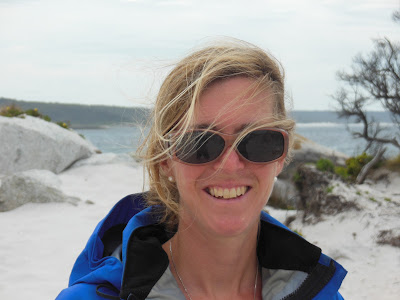 Turning inland , we went west from the coast, arriving late into Launceston; at pop.75 K the second largest city in Tassie..The fertile valleys interspaced with surprisingly steep and windy, rain-forested  mountain roads, we got into town 2 hours late, changed clothes in the car and had the best meal yet in Australia at Stillwater, a localvore temple set in a converted flour mill…A fitting finale to an amazing trip… 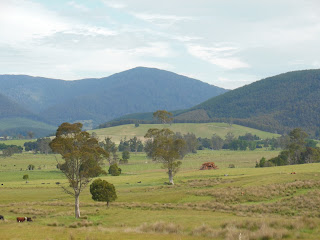 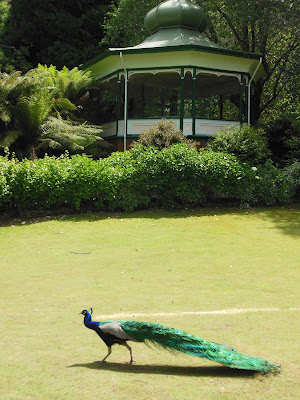 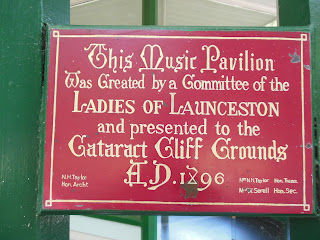 We flew back to Brisbane out of the tiny Launceston airport, somewhat fully recharged and ready to re-take on the challenge of raising our wonderful, rapidly growing and very energetic five kids..We hope you enjoyed the journey to a little known place on the planet as much as we did…After 10 years of daily parenting, our only question on arriving home was, ” When can we get away again next…and to where…?!” I have a few ideas and hope you will follow along..A tantalizing few hints:  It contains rare birdlife, the world’s southernmost coral lagoon, and is even more remote than Tasmania…Any ideas?? ..Here’s to sharing the next adventure with you too….Safe travels Doc (and Mrs) Down Under….