It’s a rainy Saturday morning here in Brisbane; rained hard all night. I thought it might be fun to post some random shots of wildlife encountered on our adventures in Queensland so far. First, a disclaimer: All shots are taken with a portable camera or even cellphone. I apologize if some aren’t up to National Geo standards; but believe me, if it’s a close-up, I was VERY close indeed…! 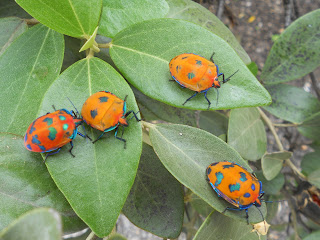 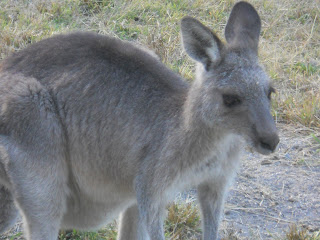 Sometimes the landscape can make it hard to place exactly where you could be. Ignoring the Eucalypt forest, memories of hill country Texas, western Montana, Maui and the Big Island of Hawaii, or mid-coast California come to mind. I guess it’s human nature to try to catagorize a new experience by referencing the familiar. But then a kangaroo will hop by and that strange sense of the exotic is stirred, and you could only be standing out in the Australian bush. Here are a few iconic Australian locals..

Deep within Lamington N.P. there is a rare opportunity to feed wild parrots by hand. It’s a tradition that’s been going on since the 1930’s at O’Reilly’s Rainforest Reserve, an in-holding that predates the park’s founding by decades.  Parrots, though numerous here, live high up in the tree canopy and fly rapidly. Easy to hear, very hard to get a good glimpse in the foliage. So, it’s an amazing experience to have these beautiful wild birds fly down from the tree tops and alight on your arm if only for a few fleeting minutes.

I just returned from a 4 night, 1300 km (800 mile) road trip with Luke and Aidan. We did a large loop west of Brisbane, through Cunningham Gap and the Great Dividing Range to Stanthorpe, then south into the Granite Belt and camped at Girraween N.P. A higher, drier plateau, but not real Outback desert. The rock formations are outstanding, and we did not see any snakes, which are by reports, plentiful in the warmer months. We did see plenty of lizards though, which makes me think snakes were out and about too..

Then, up onto the New England Tablelands that lie behind the Great Dividing Range. Yes, there really is a region of Australia called New England. As a multi-generational old Yankee, I had to check it out.  Settled by English, Scots and Irish in the 1820-40’s, it’s a high plateau, up to 3000-4000 ft. elevation, running 300 or so miles N to S, and 100 miles E to W. A high, cool plateau, mostly given over to grazing large herds of beef cattle and sheep. The villages are sparsely placed and tiny. The area is famous in Australia for having light snows and an annual foliage display, but it’s not exactly Vermont. There’s even a University of New England at Armidale, and the center for country music further south in Tamworth. Another surprising find in Australia, and a beautiful area to visit….

In a trip filled with superlatives, we also hiked the largest Granite dome in the southern hemisphere at Bald Rock N.P near Tenterfield. It was very similar to Enchanted Rock outside of Fredricksburg, Texas, for those of you readers with Texas roots. An exfoliating granite dome with wonderful views of the Granite Belt below.
﻿﻿

We then hiked up to the highest point on the plateau, at a place called Cathedral Rock National Park near Ebor.. It was a real Lord of the Rings experience as the cool fern and lichen encrusted, stunted eucalypt forest transitioned into a higher, gnarled cypress and beech mini-Bonzai landscape.

A boulder strewn series of summits rose above, out of the mist. And in a most unexpected turn, the forest trees were full of flocks of raucous lorikeets, currawongs and parrots, flying rapidly in tight clusters, the noise of their hundreds of wings slicing through the silence just above the tree tops….startling and unforgettable …
﻿

Turning east at Armidale we drove down the “Waterfall Way” into rich, moist, dairying lands, before dropping thousands of feet through the Eastern Escarpment rainforests and onto the coastal plain at Coff’s Harbor.

We finished up traveling north through the surf and beach towns of Lennox Heads and Byron Bay, another stunning landscape filled with friendly, helpful locals.

We camped at Wollomombi Falls, the second highest in AU with a drop of 220 m,(over 700 ft); and stood at the Easternmost point on the Australian Continent at Cape Byron.

All in all, a wonderful further foray into the amazingly varied countryside and habitats of eastern Australia, and our first real backcountry, or bush, camping.

I hope you enjoyed the journey half as much as we did. Hope to head further north, and further west in the near future. Best to all, but for now I have to pay for my fun with six shifts in a row in the ED…ddu.