It summer’s end here in the Southern Hemisphere, heading into fall…Rainy season in SE QLD. We don’t have the true tropical monsoonal Big Wet and Dry of the “Top End”, but it’s pretty rainy, steady and heavy off and on for several weeks; and this on the heels of Cyclone Oswald that left flooding and some devastation farther up the coast at the end of January. Well, at least it’s 75 degrees out there; but a long, rainy weekend, and time to catch up and update the blog.

I finally found the time to drive four hours north onto the Fraser Coast in late December, camping with the boys and taking an eco-tour of the vast wilderness sand island, World Heritage listed Fraser Island. You veer east off the M1 and head 70 km east on a two lane road to the hamlet of Rainbow Beach. It’s surrounded by national parkland, pop. around 500 and sits above the most stunning beach and coastline imaginable…Over 100 miles of continuous, protected coastline, the largest protected stretch on the Australian east coast…There are a couple dozen people around and about, enjoying a backdrop of the highest sand dunes on the east coast of the continent, up to 700 feet and multi-colored…Incredible! 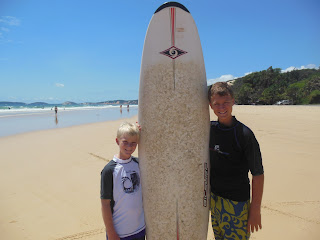 Luke was keen to rent a board and try to get up on a wave; alright, when in Rome…! 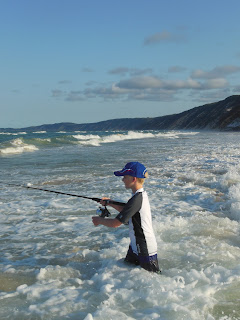 Rainbow Beach started life in the 1960’s as a timbercutter’s camp. It survives as an end-of-the -earth beach town, and the southern departure point for Fraser Island. Very laid back and chilled out…Per-fect!

The next morning  we were up very early to catch the 4WD truck and head up to Fraser Island. It’s much wilder and rougher than I expected. You have to drive out onto a barren  sandspit, onto a barge, cross a tidal river, then drive up the beach on the eastern side of Fraser Island. That’s just to get started…!  Friends said to just rent a 4WD and get up there yourself.. No way, for the uninitiated….. We saw six rigs bogged down just trying to get onto the island. 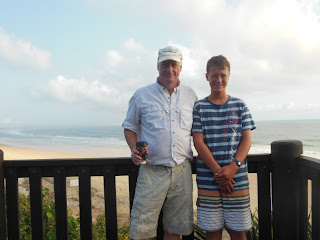 Even these experienced guides travel with two custom-fitted trucks together. Once off the beaches, the roads in the interior are atrocious. The worst I’ve ever driven, even in the Amazon…Deep soft sand with 18 inch ruts, single lane, no shoulders…There are no paved roads on the whole island… Some roads were even closed to eco-tours due to their getting bogged down. Lots of fish-tailing and thumping. Fraser Island is enormous, 80 by 10 miles or so, the world’s largest sand island, with many distinct, unique and rare ecosystems. It wasn’t World Heritage listed until 1992 when logging was finally halted. 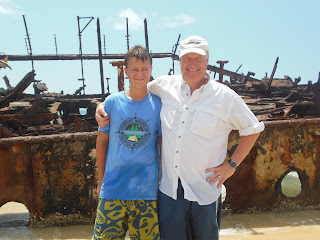 We were exceptionally lucky, not just to see dingoes three seperate times, but to come upon a probable mother and pup feasting on a Wallaby carcass at the tide line. They completely ignored the truck and carried on about their meal. Greg, our guide, said that he’s never seen this in 18 years of regular guiding on the island. The Fraser Island dingos are thought to have arrived on the island with Asian traders as long as 5,000 years ago, and have been completely isolated from other canine species since. They are considered to be the most genetically pure strain of wild dog on the planet. Another Fraser Island superlative…They look like a smallish German shepard, and are mainly nocturnal. Numbers have been culled to keep the population sustainable at around several hundred and being primarily nocturnal, are infrequently seen on day trips. 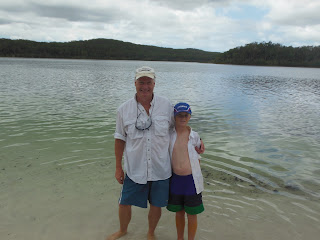 The tour takes you to the famous perched Lake MacKenzie , composed entirely of raindrops, it has no inlet or outlet, is thousands of years old and pristine. A sedimentary layer, built up over eons seals the bottom, and it’s several hundred feet above sea level, hence the name. There are also window lakes, named due to their communication with the underlying water tables. Fraser Island has over 40 such lakes, again, the largest number in the world 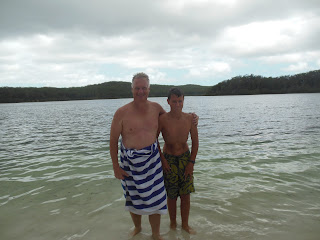 And then, way out in the middle of nowhere, your Aussie guide grills you up a steak while you take a dip, complete with salads, fresh fruit and a cold Aussie beer. For $100 bucks, it’s the only way for a Fraser Island neophyte to go! Plus the guides have encyclopedic knowledge of the area’s flora and fauna, history, politics, controversies etc and provide a very engaging running commentary throughout the day. In all, highly recommended….

One amazing feature of Fraser Island is the presence of extensive hardwood rainforests, growing out of pure sand. Actually there is  a shallow layer of nutrients about three feet deep that nourishes these giants; precious humus built up over the ages. These forests are considered to have developed over some 750,000 years to their current state. Individual mature trees are over 600 years old. 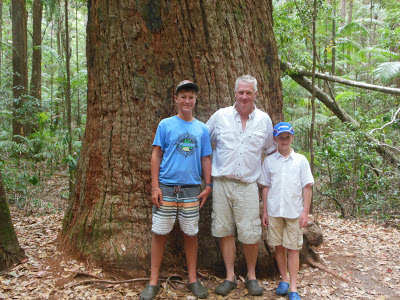 The Satinay tree is unique to Fraser Island, highly prized for it’s resistance to rot; they are said to have been used to build the London docks, and line the Suez Canal. Many pitched battles were fought to curtail their logging, which was finally stopped in the late 1980’s. There is no ongoing logging on the Island which is World Heritage listed in it’s entirety since only 1992. 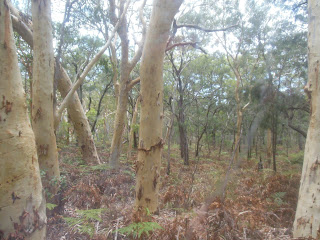 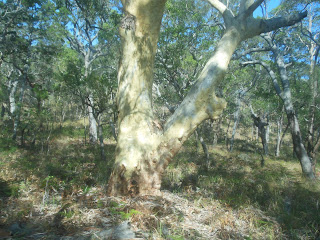 There are many other Eucalypt and Maleleuca forest types on the island too. Here are a few samples… 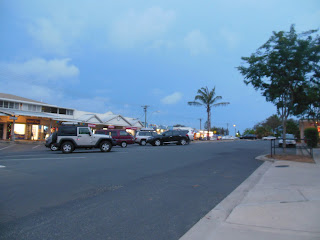 After such an adventurous day, it was time to chill out at the local Hotel, have a bite, and get to bed. Up early for further adventures! 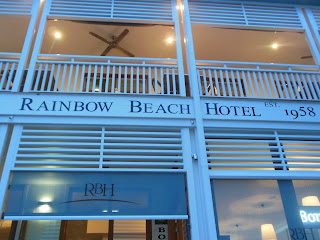 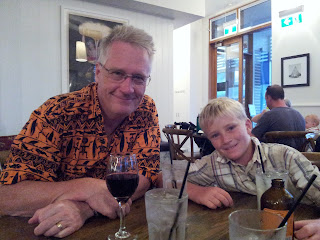 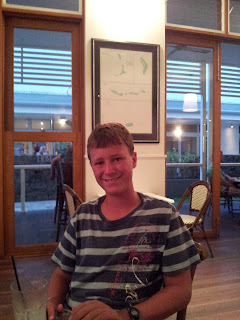 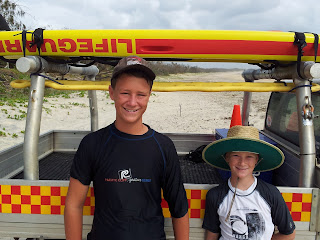 There was some commotion down the beach, so we went to see what was up. It turns out a truck, fully loaded for a fun weekend got bogged down the night before and got flooded by the high tide. The whole family camped in a tent above the tide line, and had off loaded all the gear. A bad, and very expensive, way to spend the weekend. The local bars have “walls of shame” with photos of dozens of similar wrecks and scenes of despair, some fatal….It’s treacherous out there…! 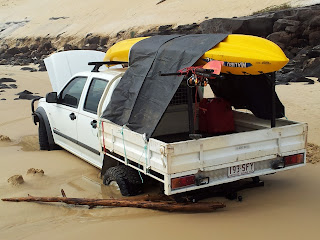 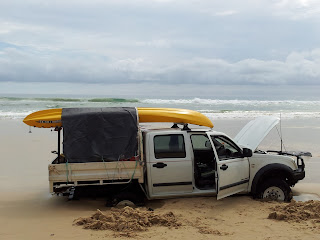 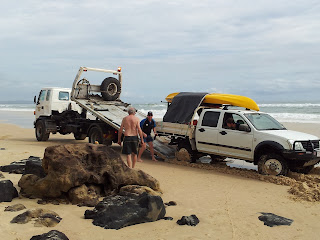 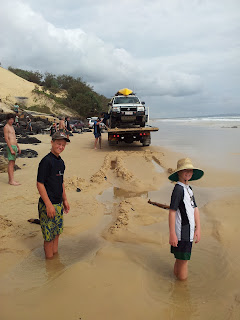 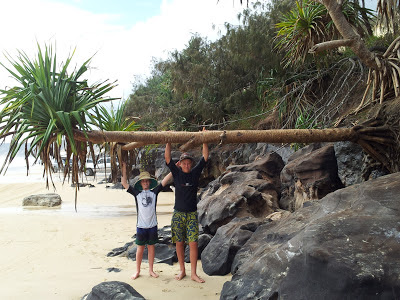 Right above town is a break in the tree cover, where the wind pushes fine sand through, the Carlo Sandblow. It was seen and recorded by Captain Cook, during his epic voyage of discovery in 1770, and named after one of his crewmembers. Locals try to sandboard down the steep slopes…Luke and Aidan tried it with boogie boards , with limited success. 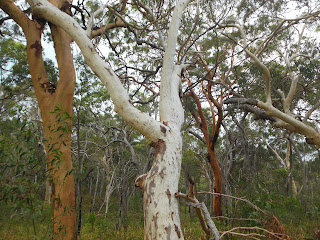 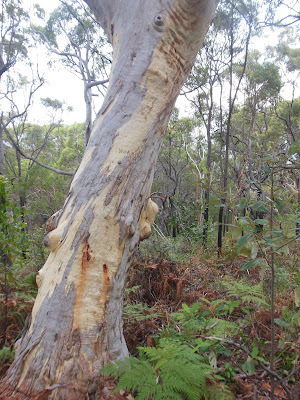 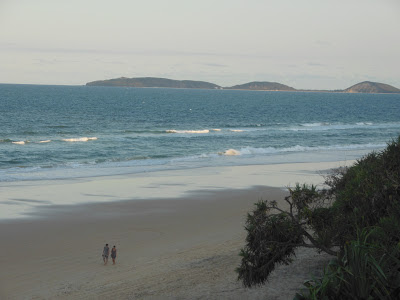 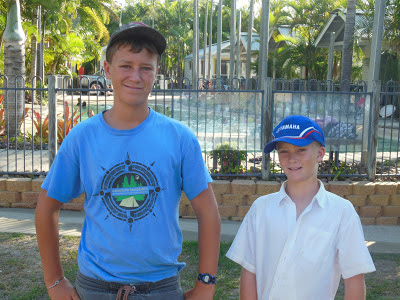 After a final bit of morning fishing, it was time to pack up and head home. We did a short hike up the Wild Horse Overlook at the ancient and stunning Glass House Mountains. Another landmark recorded and named by Captain Cook in 1770 on his voyage up the east coast of Australia. 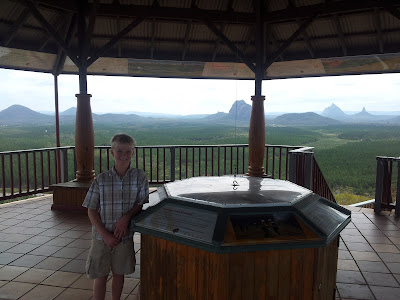 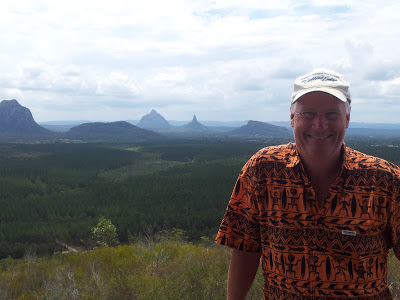 Thanks for following along on yet another road trip into the vast, diverse and wonderful landscapes of Australia. I hope to stay a bit more up to date, esp. if the rain continues!  Best, Luke, Aidan and DDU…. 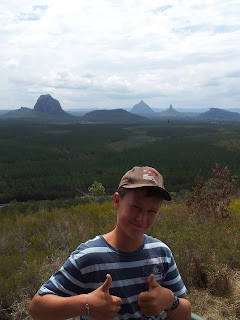